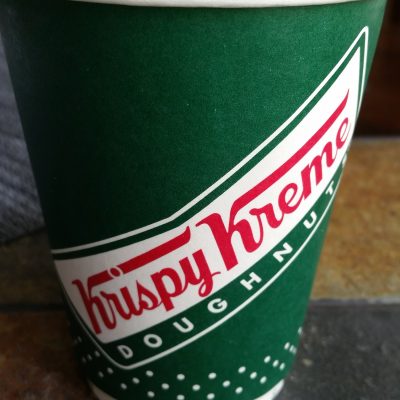 On a bright and lovely Tuesday morning I decided to go get some tasty donuts for “breakfast” at the Licata house. A plan was made to visit the local shop in my neighborhood and get fabulous Fluffy Fresh Donuts before they sold out at about 8am.

To my dismay, all of the fluffy, fresh, sugar glazed goodness had already been claimed and I (and the expectant household) were left wanting.

In a moment of self proclaimed brilliance I made my way to the nearby KrispyKreme for some hot and fresh(?) sugar/fat rings. As I made my way to purchase what I knew would be a regrettable decision, I figured a cup of “rich” blend coffee would justify any wrongdoing I would be accused of in the coming 10-15 minutes.

After arriving home with the spoils, my first step was to shove a donut in my mouth. Not going to lie, it was better than it probably should be. Next came the coffee. Everyone knows that donuts and coffee are a natural pairing.

My thoughts: As my usual method, I tasted the coffee black to start. It was rather nondescript, but reminiscent of coffee. Not very bitter, it just seemed a bit flat and thin. Perhaps the beans were a little stale, but overall it could pass for a reasonably roasted coffee.

Next I dunked my glazed donut (yes this was the second… maybe third) and tasted it as coffee dripped all over the counter. Much better! An addition of a little cream livened it up, but some sugar made it tasty enough to get down in a hurry. At that point dunking the donut just became a game of diabetes roulette.

Ultimately, not a bad choice to go with the sugar balls from the same store, but a cup we brewed at home (rated on this site nonetheless) was even better with the donuts!