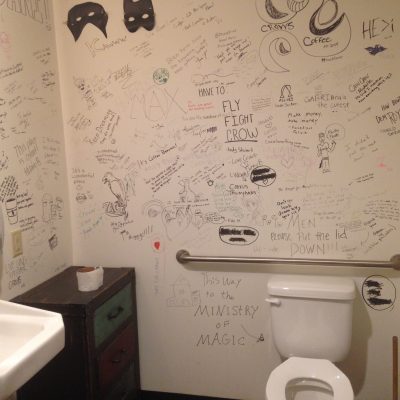 Oh the mid 90’s. Yes, the years of My So Called Life, crazy bubble gum packaging and Boyz II Men. Who didn’t slow dance to “End of the Road” or have a serious case of unrequited love for Jordan Catalano? I can only speak for myself I suppose… 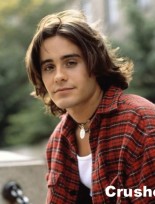 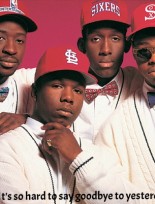 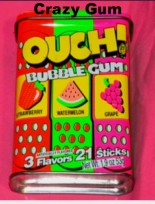 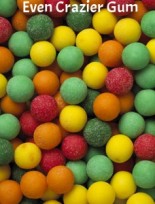 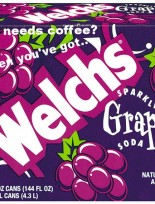 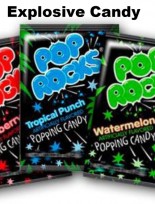 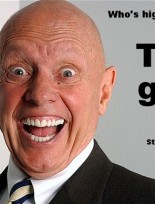 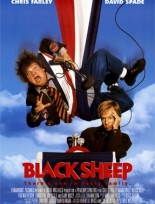 When I entered junior high, I loved sourball candies, overalls and my drink of choice was grape soda. It wasn’t so much because it tasted like grapes, because we all know it doesn’t really. You see, like many 13 year olds these were my braces years. Curiosity being a powerful motivator in my youth, I found that there was an interesting flavor and sensory experience to be had in the interaction of grape soda with the metal brackets in the back of my mouth. Later I would discover that Pop Rocks made for a totally fascinating experience. Ah, the early explorations of palate development.

At this point I was definitely aware of coffee as an option, but it just wasn’t for me. It was for “grown-ups” and I wasn’t in a hurry to be one of those yet. However, some of my peers felt a bit differently. They began to get into coffee by way of an emerging craze- the gas station cappuccino. 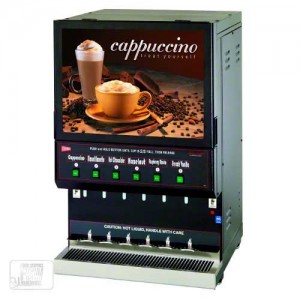 Many of my friends talked about how much they loved “cappuccinos” and some of them even had designs to get themselves a cappuccino maker for home. With all the fuss I cautiously gave this new coffee trend a chance to impress me. Alas I could still taste the abominable “coffee” through the mass of sugar. Beyond that, I found it to be hotter than the fires of hell. On the rare occasions that I gave into the peer pressure surrounding this beverage, I found a coping mechanism. You see,  generous amounts of International Delight’s chocolate flavored creamers masked the coffee taste, as well as lowering it to a non skin-peeling temperature. As 90’s business mogul Stephen Covey would advise-  “Think win-win”. But just because I could now stomach something vaguely resembling coffee, I wasn’t delusional enough to yet think myself a coffee drinker.

Time passed and my sophomore year I went on an outing with some people from my new high school. The plan was to go to the movie “Black Sheep” and then head back to one of their houses to play games. Before the movie one of them suggested going to a place called “Coffee Depot”. My memory of it is a little thin, but I remember it being very bright- white walls and bare decor. It smelled heavily of coffee and bringing with it its intoxicating, albeit perplexing allure. Surrounded by this plush and rich aroma I decided to give coffee another go, momentarily abandoning my previous coffee convictions. But I was about to face an entirely new level of coffee. Espresso.

I looked at all of the words on the menu board, searching my inner depths for any context clues that might aid my decision. As a student of music all I could surmise was that the words I was desperately trying to understand were Italian. Beyond that I was at a total loss, baffled and most definitely very intimidated.

Being a teenager, there was no way I was going to swallow my pride and admit to the girl on bar that I didn’t understand how to order. Still determined to get a cup of coffee that finally tasted like it smelled, I decided to ask one of my companions, Clint, for advice. I explained where I was at with not really liking the flavor of coffee, asking for any direction that might make for a more positive experience. He thought for a moment and suggested that I try a “latte”. Trusting his infinite coolness, I placed my ordered and began to anticipate the experience. Was this going to finally be that moment? The one where I like coffee?

The girl called out my order and I excitedly took the 16oz cup in my hands. Testing the temperature, I decided it was safe to drink and eagerly took my first hopeful sip.

While it was less hot than other coffees I had tried, it was terrible in a new and different way. Even though it was drowned in no less that 12 ounces of hot milk, the sharp stab of coffee bitterness rang through like a bell. The steamed milk added a new dimension, making it stronger and thicker in a way that it stuck like glue to my tongue. Feeling violated, I handed the coffee to Clint as my decision towards dislike renewed with the teen rage of betrayal. I excused myself to the restroom, taking a moment to get away from the rest of the group and take care of business before the movie. Opening the door to the small dark room, I reached around the doorframe in search of the switch. Upon locating it, I flipped on the lights. It was then that something truly magical happened.

The same stark white that appeared throughout the plain cafe had been used to cover the walls of the bathroom. But every inch of these walls was covered in beautiful, colorful words. For the first time in my life I witnessed the phenomenon of encouraged and collaborative graffiti. I stood in complete wonder of this site, taking my time to wander through the random thoughts of complete strangers. This was, hands down, the coolest thing I had ever seen. Anywhere.

Picking up a purple marker, I took my invitation to express myself freely. Lost in this new found sense of liberation the coffee traumas of only a few short moments ago just washed away. 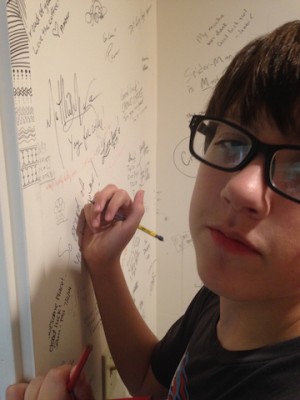