We tried out bulletproof coffee… 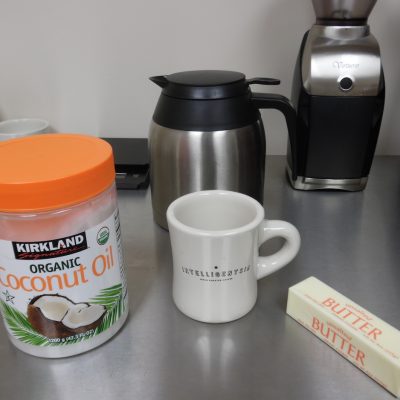 If you are like me, you have probably at least heard the term “bulletproof coffee” in passing. I knew it was something mysterious that people were talking about, especially in paleo and low carb diet circles. I have personally used a few versions of low carb diets with very positive results, but I think anytime you remove processed sugar and grains and eat tons of veggies instead you will feel pretty good. Enough about diets though!

The more I saw people talking about bulletproof coffee, the more it seemed that I should try it out and tell people about the experience.

To preface, “Bulletproof Coffee” is a marketing and sales pitch by a man named David Asprey who claims to have a ‘low toxin’ version of coffee that only he has been able to discover. Unfortunately his claims are extremely vague, giving no real explanation of how he has achieved such voodoo.

The recipe we found is simple:

Blend it all in a blender for 30 seconds and watch as fat melts away and you have the limitless energy of a 6 year old again.

I wasn’t looking to invest a ton on ingredients that I will never use again, but luckily I cook with coconut oil and butter all the time. When I first tried this recipe I didn’t think about having a blender on hand, so I just tried putting everything together in a cup and letting the hot coffee melt the fats. I also got to test things like “How do I get 1 tsp of a stick of butter??”

The result was an oil slick on top of a cup of coffee that was neither appealing nor delicious. Clearly the magic had to be in the blending part.

So I came back with my handy blender and tried again. Now, I have unfortunately had the experience of trying to blend a bunch of hot ingredients in a blender and had it explode on me. So word of caution: Hold on to that lid!

The blending made a nice frothy layer on top of the coffee which gave me hope for the magical transformation.

OMG this was terrible!

It tastes like a fatty, mouth coating, life sucking, vampire coffee. I didn’t expect it to be sweet, seeing as how it is a paleo recipe, but good lord was it funky! Honestly the flavor is tough to describe, but imagine a way to amplify the bitter character of a coffee while giving it a savory edge. Personally I didn’t mind the flavor of the oils in particular but some friends I had taste it felt the coconut oil tastes like sunblock. Fair enough.

The positive aspect of this was the froth on top. It was a nice texture, but that is as far as I can praise this concoction.

I certainly understand abiding by a low carb or paleo diet, and I understand that good fats are a necessity of these diets. In the end this recipe took a completely drinkable coffee and turned it into a half dead wretch of itself.
I would personally prefer to just eat a tablespoon of coconut oil and butter and then enjoy the coffee on its own. Or there is another fatty substance that incorporates into coffee quite nicely without the use of a blender. It’s called “cream”.

Throw a couple pats of butter on the side, Sally!