With A Little Love: An Ode To My Coffee Mom 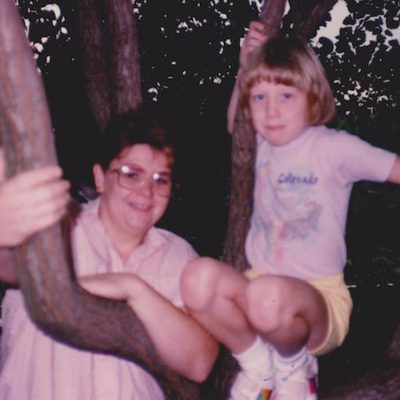 My stepmom came into my life when I was 5, courting me alongside my father on their path towards marriage. Patient and kind, she took to mothering an infinitely (and sometimes infuriatingly) curious child with grace. She took the time to figure out what I was seeking in my constant quest to better understand the world I found myself in that day, despite the limited vocabulary of youth. Giving me the time and space to come to it on my own, she let me address her however I felt comfortable. By the time I was 9 she was “mom”. 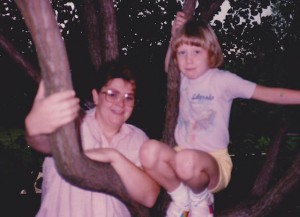 Mom’s coffee-life began watching her parents start every day with a cup of coffee. Her father, a drug store representative, was an early riser that worked from home. She recalls fondly how she would come down from her bedroom after he was well into his day, always finding a trail of brown coffee droplets in the hallway leading to his office. Not much of a coffee drinker herself, her time would come later, in her early twenties out of necessity.

A strong and determined woman, she wanted nothing more than to be a paramedic, but had always had trouble finding the ability to sustain focus in tedious technical reading. In an effort to overcome what she would later discover was attention deficit disorder, she’d start her evening study sessions with a large pot of coffee, add cream and sugar until it was palatable, and then pace for hours while she read her text books. Unknowingly beating back her ADD through the power of coffee, she soon got her deepest wish and began her career as a paramedic with Med-Act.

No longer needing it to study, coffee took on a different function in her life. Our household, while rich in love, lacked in an excess of resources. As a result she and my dad often had to find creative means to go out and enjoy eachothers company. While it wasn’t as often as they would have liked, “coffee dates” became a great outlet for tending to their relationship. They would often go to Borders and wander through a maze of books, sitting over a simple cup of coffee as they shared their finds or just sat in comfortable silence with one another as they read. While the coffee itself was nothing spectacular, it became a medium for deepening their friendship.

Once I entered the world of coffee, things began to shift. While sugar had long since been left behind, her love for cream in coffee remained. As my knowledge of coffee grew, her preference for espresso beverages did as well and she soon discovered the mother of all drinks- the breve. A genuine craving for coffee treats began to occur with increasing frequency.

I soon hit the inevitable “snob” phase of the coffee nerd process, looking down my nose at anything that wasn’t pure unadulterated coffee. Like many professionals, the coffee sins of my parents bewildered me, but my mother remained fixed in her cream adding ways. I would bring her coveted high dollar coffees of different varieties and processes and try to explain them. She’d listen to my nerd out sessions, say “That’s really neat, Holly!” and pour in the cream before she gave them a true taste. Like many ‘kids’, reality hit me and I eventually gave up all hope that my parents’ tastes would ever change.

But something was happening in all of that time. While she was never too proud to drink whatever coffee was put before her, the seeds of palate development were working their slow magic. While it has been at least 5 years since I accepted the things I cannot change (my mother) and even began to find comfort in the stalwart stability of her choices, last week I glanced down at my phone to see this notification: 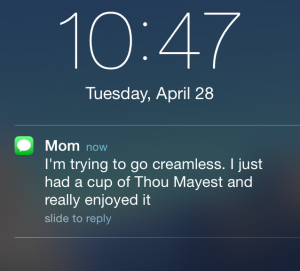 My world shifted on its axis. My mom was suddenly enjoying coffee…on its own. What the what was happening?

It turns out that after a Roast Ratings research tasting session with Pete and I, she really got to thinking about what she was tasting. The irony is that our research was in an effort to better understand how our parents talked about coffee…not them understanding us. Somehow that experience, alongside the dietary benefits of going creamless, she decided to try something new. And holy moley, she likes it. Hey Mikey!

The point of the story? This really isn’t about a victory for me under the banner of Specialty Coffee. It’s more a tale of letting go of my own coffee mania and accepting her tastes, regardless of what my education would have me believe. Sometimes the people you love find a different sort of joy in the things you take seriously. I’ve been in coffee for almost 16 years and all of my efforts were for naught until I took the time to listen to where she was coming from and hear of her coffee love through her story. Besides, while she doesn’t remember it, she had a great deal to do with my own coffee journey. But that’s a story for another day.

My best advice to aspiring coffee nerds out there- when it comes to coffee, love your moms right where they’re at. Better yet, take a little time and put on your listening ears. There’s wisdom to be had in every mom’s journey. For my mom coffee served as a facilitator, helping her achieve her aspirations and have a stronger relationship with her husband. At other times it was a small joy that made a bad day better and a good day outstanding. Regardless of the reasons, her coffee way has served her pretty darn well.

To all you moms out there, Happy Mother’s Day! Thanks for drinking coffee your way and -most of all- for giving us the freedom and support to follow our own paths, no matter how outlandish they may seem.